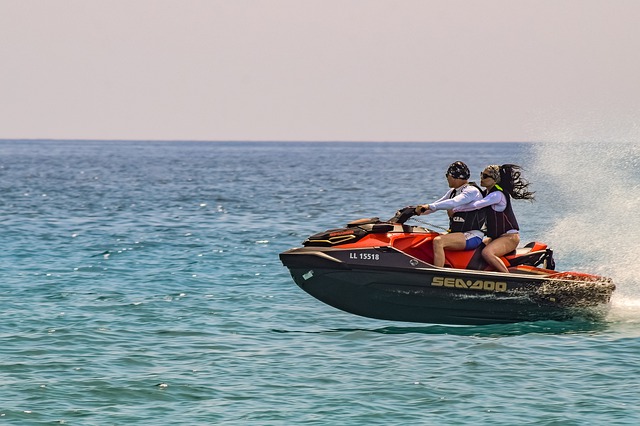 When it comes to jet skiing, there’s always a perfect model for everyone who’s interested in riding one. The categories for jet skis are split into 5 different types. They contain rec-lite, recreation, tow- sports, luxury, and performance models.

This was a newly created model for people who don’t want to spend as much on jet skis. They’re considered the cheapest type from all the categories. Additionally, they’re typically meant for beginners who are interested and who want to get started. The rec-lite models were created to be unique compared to the other models. They are built to be smaller and lighter with a smaller engine too.

Rec-lite got introduced by Sea-doo. Sea-doo launched with their spark model at first. Yamaha had then started doing the same as them with their new EX model.

Rec-lite models are now super popular and also the most purchased models because of how affordable they are compared to other models. The price for this type can generally range from around $5,400-$9,000 online. In case you’re wondering, the top speed for these models tends to be from approximately 40 mph to 50 mph. Rec-lite jet skis will certainly continue to be such a great option to go for.

The best way to refer to recreation jet skis would be as the standard ski, not too big or small, and not too powerful. They’re a bit more expensive than the rec-lite models but they still don’t break the bank as we compare them to others later on in this article. The starting base price for this type starts from around $9,700 to $11,000. It’s the perfect jet ski for you if you’d like to get your family on one or two. Sea-doo, Yamaha, and Kawaski all make this type of jet ski.

Model names from each brand:

The top speed for the recreation models may reach 60 mph. Some of the models even offer a brake and give the option to start in neutral such as the new Sea-doo GTI which makes docking and parking easier. The amount of horsepower you’ll often find on one of these watercrafts would usually range from around 100HP to 170HP.

If you love pull sports, like wakeboarding or water skiing then this model is perfect for you. Sea-doo is the only brand that has launched a jet ski made for tow-sports in the market. Sea-doo launched the wake 155 and the wake pro 230 with a pylon installed that keeps the tow rope up high and out of the way to be more clear. The difference between them is that the pro 230 has more stability and more power from the engine. These models reach up to around 50 mph to around 60 mph.

When you purchase a jet ski from this category, you also receive a wakeboard holder that prevents the board from being in the way. A cool feature that comes with these models is SKI MODE. It includes cruise control which allows you to maintain a steady speed for the person who’s being pulled. Another thing to keep in mind is that it will also be convenient to own a wake jet ski rather than a wake boat as it’s way easier to go out for a quick pull. Furthermore, not much work or effort is required to put the equipment back up when you finish pulling you’re family and friends.

This jet ski model is considered valuable when you compare it to other categories. The main reason for this is because of the nice extra features such as SKI MODE and cruise control. These type of features would usually be on the luxury models which is why it would be considered as practical. A good recommendation would be to go for the wake pro 230 since it has a stronger engine.

If you’re interested in going fast but in style and comfort, then this is the perfect model for you. Luxury jet ski models are quicker, more comfortable and to add on, they look nicer too. They often include a larger engine that can make the ski launch up to 65 mph. It’s always nice to go for an upgrade if you’ve been riding the cheaper watercraft models for a while now. However, keep in mind that they’re one of the most expensive jet skis from all the categories mentioned. They often cost around $16,000 online stock. If you wish to have all the best, newest features and all the power, then the luxury model is perfect for you.

The performance models were built for people who love going fast and love to race. These type of jet skis contain the strongest and most powerful engines from all the markets and are also usually supercharged nowadays. If you want to be the king of speed on the sea or lake, then this performance watercraft is meant for you.

A lot of people buy these models because they wish to use them for racing against other boats or watercrafts. Stock performance models cap out their top speed at around 70 mph. However they’re super expensive because they may even be able to reach 86 mph after complete stages for higher RPM. Those who buy these jet skis have committed themselves to water sports and absolutely love high speeds on water. These are the most high-priced jet skis on the market out there and from out of these 5 categories at around $17,000. Anyone who owns a ski such as the performance model will be able to outrace any boat or watercraft majority of the time!

Be sure to definitely check out my other blog post on the Fastest Jet Skis!

Also make sure to also check out my other blog posts!

I’m Tudor Ardeleanu and I’m the founder of Powerful Outdoors. I initially started this website to make useful content based on the outdoors for everyone. I love to spend my time doing outdoor activities. Born in Romania but lived in Bahrain most of my life.

Powerful Outdoors is a participant in the Amazon Services LLC Associates Program, an affiliate advertising program designed to provide a means for sites to earn advertising fees by advertising and linking to Amazon.com. We also participate in other affiliate programs which compensate us for referring traffic.